Meet Jessica the Hippo – one of the world’s most famous animal stars. She’s played the lead in several National Geographic documentaries, appeared on the Discovery Channel, SKY news, BBC, Japanese, German and Australian telly and even made it onto the Oprah Winfrey Show.

Annually, thousands of tourists flock to the 6 ha reserve in Hoedspruit, situated along the Blyde River to catch a glimpse of Jessica.

Her favourite snack is homegrown Rooibos, and she eagerly gulps down 20 l a day.

Honorary game ranger, Tonie Joubert and his wife, Shirley, raised Jessica since she was a calf. They rescued her during the devastating floods that ravaged parts of Mozambique and South Africa in the year 2000.

“Shortly after being born, Jessica must have been swept downstream and thankfully, we found her still alive and intact on the banks of the Blyde River, near our home” Tonie recalls.

“When we got to her, she was weak and exhausted by the ordeal. She had no energy. Realising that she needed help, I picked her up and saw she was only a few hours old as she still had the umbilical cord attached to her.

“She needed milk urgently, but being so small, we couldn’t feed her cow’s milk. I quickly prepared a formula, which consisted of egg yolk, cream and full cream cow’s milk to create a substitute for colostrum. To our surprise, she took to the teat of the bottle greedily, and could hardly get enough of my formula.”

At 16 kg’s and 30 cm tall at the shoulder, it was the smallest hippo they had ever seen. Over a 24-hour period she had to consume 10% her body mass in milk (1.6 litres) – needless to say Tonie and Shirley had their hands full.

“Jessica’s chances of survival in the wild were very slim and we realised that it would be far more merciful to see the journey through, than to just let nature take its course, and so she became part of our family,” says Shirley.

When the time came to wean Jessica, they experimented with various teas, but the only one she took to was Rooibos.

“To this day, she’ll only drink Rooibos and prefers to take it warm with a bit of brown sugar. She has it for breakfast, lunch and supper, and always nudges us for it just before bedtime. It helps her to fall peacefully asleep on the veranda with our five English bull terriers – her very best mates.” 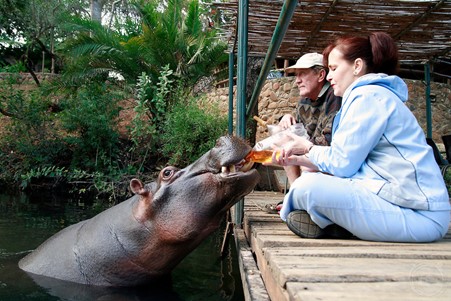 Game ranger, Tonie and his wife, Shirley Joubert, adopted Jessica when she was only a few days old, after they found her on the banks of the Blyde River during a flood 22 years ago. Her favourite snack is Rooibos of which she drinks 20 litres a day.

Weighing a modest 1 400 kg, Jessica maintains her figure by grazing on grass, consuming 5 kg of carrots and apples each, along with a loaf or two of bread.

With more than 100 films to her name, she must be one of the most documented animals on the planet. She also starred in Leon Schuster’s blockbuster movie, Mr Bones. She has her own fan page and celebrities from all over come to meet her.

Tonie says tourists enjoy feeding her on top of a raft on the river or by the jetty. “We give them each a warm bottle of Rooibos and well-prepared sweet potatoes cut into slices, which she simply can’t resist.

“She is a dear friend and is very protective over us. While hippos are known to be aggressive, Jessica is so gentle and kind.

“In 2012, we adopted another hippo, called Richie, who is exactly like Jessica. They both love Rooibos, watching television and listening to music with us. We must be the only people on earth living with hippos,” chuckles Tonie.

According to the SA Rooibos Council (SARC), the brew is one of the most sought-after herbal tisanes not only because of its high level of antioxidants, but for its alkalising benefits too.

Marthane Swart, secretariat of the SARC says that’s why Rooibos is a core ingredient in many pet foods.

“When it comes to the health of your pets, it’s vital to ensure the right pH balance. An alkaline environment allows your pets’ organs, tissues and immune system to thrive. Animals can also benefit from Rooibos’ health-giving properties by simply pouring it over their food or giving it to them to drink.

“The variety of antioxidants and bioflavonoids make Rooibos an important daily supplement for both pets and humans,” remarks Swart.

For more info on Jessica the Hippo and/or Rooibos’ health benefits, visit http://www.jessicahippo.com/ and www.sarooibos.co.za.

EASTER INDULGENCE: HOW TO PAIR ROOIBOS AND CHOCOLATE LIKE A PRO