A CUP OF ROOIBOS A DAY, GOOD FOR REPRODUCTIVE HEALTH

You are here: Home / News / Featured / A CUP OF ROOIBOS A DAY, GOOD FOR REPRODUCTIVE HEALTH

A CUP OF ROOIBOS A DAY, GOOD FOR REPRODUCTIVE HEALTH

This February, which is recognised as Reproductive Health Month, the spotlight has fallen on another 21st century crisis – plummeting fertility rates.

Fertility levels worldwide have plunged to an historic low with scientists predicting that by 2025, almost 10 million couples will struggle to conceive.

South Africa faces the same conundrum, with already more than 20% of couples struggling to conceive naturally.

Experts attribute the decline to economic prosperity, urbanisation and the changing models of family life as leading factors. Modern-day couples are delaying having children due to increased educational and professional opportunities, wanting to acquire wealth, travel and explore the world before having children.

As a result, more women are having their first baby in their late twenties to early thirties.

But the increasingly low fertility rate is not just a female issue. According to the Infertility Awareness Association of SA (IFAASA), an estimated 40% of infertility issues can be attributed to men, a further 40% to women, and the remaining 20% are a combination of both.

Dr Crystal Meletiou, a therapist specialising in supporting women with fertility and menopausal challenges says it is a common misconception that male fertility will continue well past a woman’s decline in fertility.

“While the effects of age on female fertility have been known for some time, more recent studies have found that the age of a male partner also affects the chance of conceiving. In women, fertility generally starts to decline in their 30s, while in men it starts to drop from age 40 when sperm quality and motility decreases.”

Aside from getting the timing right, health also plays an important role in getting pregnant.

“Quitting smoking, limiting alcohol intake, getting adequate rest and exercise, along with eating a nutritionally balanced diet, rich in antioxidants are some of the natural ways in which you can help boost fertility,” advises Dr Meletiou.

She says the benefits of natural products and antioxidants in the treatment of infertility in both male and female patients are supported in several studies. “One study in particular, published by a team of gynaecologists, obstetricians, urologists, nutritionists and other specialists from the International Islamic University of Malaysia, discusses the benefits of antioxidants on sperm production and quality.”

Besides being an advocate for emotional wellbeing when trying to conceive, Dr Meletiou is a firm believer that the properties of natural remedies can play a significant role in the struggle of infertility.

One such a natural remedy may be our indigenous, Rooibos tea.

Adele du Toit, spokesperson for the SA Rooibos Council (SARC) refers to several papers which point to how Rooibos could benefit reproductive health in both men and women.

“The Department of Biomedical Sciences at Cape Peninsula University of Technology (CPUT), which compared the effects of red and green Rooibos, Chinese green tea, and commercial Rooibos and green tea supplements on rat sperm, found that sperm count and motility were significantly higher for rats on red and green Rooibos due to their high antioxidant content, than with any of the other groups.

“A further two studies, one conducted by CPUT on diabetic rats – a condition which is often associated with male reproductive issues, such as low sperm count and another piloted by the University of the Western Cape and University of Limpopo on rodents that were fed Rooibos tea for 52 days, again confirmed Rooibos’ beneficial effect on sperm concentration, viability and motility.”

The tea may also hold advantages for women she says.

According to a study published in the SA Journal of Botany, Rooibos improved the overall health of the uterus, endometrial lining and ovaries in female rats after 21 days of consumption.

Phytoestrogens are naturally occurring plant estrogens that have a similar chemical structure to human estrogen. The interest in plant-based estrogens or phytoestrogens, as an alternative to hormone replacement therapy (HRT) or estrogen replacement therapy (ERT) is on the increase as many women are reluctant to take conventional medication to reduce menopausal symptoms, which makes this finding significant.

Du Toit says although many of these studies were conducted in rodents, Rooibos could potentially have the same positive effect in humans. “As with everything, moderation is key, but up to six cups of Rooibos can be consumed daily.” 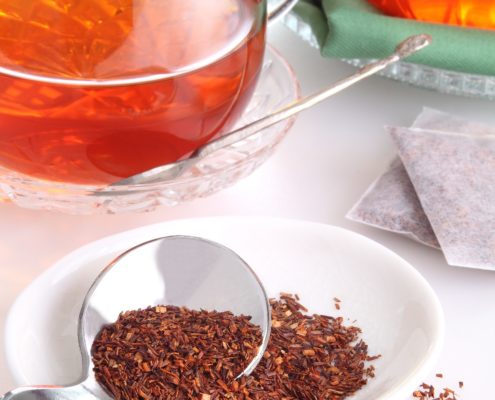 DITCH DETOXES AND REJUVENATE YOUR BODY WITH ROOIBOS THIS NEW YEAR

SURVEY: SOUTH AFRICANS HAPPIEST WHEN SPENDING TIME WITH LOVED ONES AND SIPPING...
Scroll to top